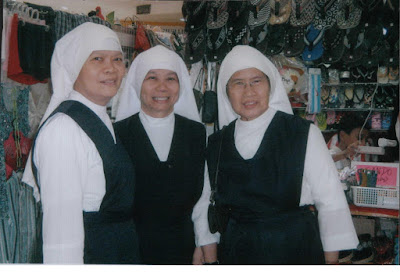 The Daughters of Mary (DM), Mother of the Church Institute, is a Diocesan Religious Institute founded by the late Archbishop Most Reverend Teopisto V. Alberto, DD for the Archdiocese of Caceres in Naga City on October 11, 1966. Its primary aim was to provide women religious to teach catechesis in public and private schools in the said Archdiocese. As time went on, its apostolate was expanded to include family ministry and assistance to diocesan and parish offices. As the institute started to grow in number and requests for assistance from other dioceses started to come, other mission houses were opened in other areas not just in the Bicol Region.

The sisters believe that every mission house opened is God’s providence sent to them through the kindness and generosity of His instruments. Tandang Sora was one such story. In 1977, the Congregation was already present in the Archdiocese of Manila, with its mission house then located in Quiapo, Manila. At that same time, its sister congregation, the Holy Face Sisters founded by Mother Therese Vicente and also the DM’s collaborator was also operating in Manila. In order to give way to its sister congregation, the DM closed its mission house there in 1986 and looked for a new place in Metro Manila. It so happened that a couple, Mr. and Mrs. Ponciano, and Mrs. Marlene Icatar, offered their house to the sisters rather than to leave it idle and on May 31, 1986, the DM’s Tandang Sora Mission House was formally opened with Sister Delia Mendones as its first local superior. Sister Delia is a sibling of Mrs. Marlene Icatar. The Formal Decree of Establishment from His Eminence Jaime Cardinal Sin was issued on June 27, 1986. With the creation of the new Diocese of Novaliches in February 9, 2005, the SLRP, where the DM Mission House belonged, was transferred under its jurisdiction. The Decree of Recognition was then granted to the community by His Most Reverend Antonio R. Tobias, D.D., the Bishop of Novaliches.

The main apostolate of the sisters is to give catechesis at Culiat High School. They also offer their services to SLRP by taking charge of the upkeep of the parish church and giving recollections to different religious organizations and to public school teachers. In their desire to reach out to more families in the neighborhood, they established the Little Flower Nursery and Kindergarten which was later renamed the Marian Formation Center. In 2011, this Formation Center will be celebrating its 25th Foundation Anniversary.

The DM’s twenty two years of existence in Tandang Sora, from 1986 until the present, brought different batches of sisters who were assigned to do their mission in the parish. Presently, the sisters assigned in the area are: Sister Aurora Gucila from Pampanga, acting as local superior and her members are Sister Pudenciana Miralo and Sister Mamerta Miralo, both from Tabaco City in Bicol and are biological sisters. Working quietly, yet with the grace of the Holy Spirit, the presence of the DM community has already bore fruit. In 2000, one lady from the Parish itself, entered the convent in Naga City leaving behind her stable job, her family and the lifestyle she was used to. Sister Elena Tristan Aguilar professed her perpetual vow last May 3, 2008 at the Basilica of Our Lady of Peñafrancia in Naga City with the joyful presence of her family, relatives and some SLRP parishioners.

The sisters are requesting for prayers and any spiritual bouquets that can be offered for the immediate processing of their application for the Congregation’s pontifical approval in Rome.
Posted by Team SBS at 10:01 PM