Missionary Sisters of the Queen of the Apostles 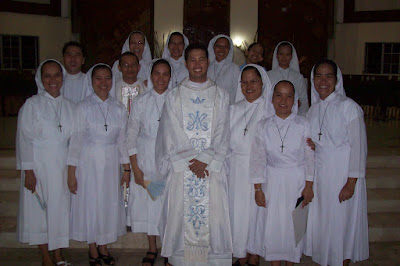 The Congregation of the Missionary Sisters of the Queen of the Apostles (Societas Missionalis Sororum Reginae Apolostolorum, SRA) is a Roman Catholic Missionary Society which was canonically established in Vienna, on July 1, 1923.

From 1872 to 1876 the German Jesuit priest, Antonius Maria Bodewig worked in India as a missionary. Seeing the sad situation of the women, children, and above all, the widows, he wanted to found a missionary congregation for their liberation. He took keen interest in it and took many initiatives for the same. His approach was several decades ahead of his time and he had to face severe opposition and did not get the permission from his local Ordinary to actualize his dreams.

In 1905, Father Bodewig sent a group of brothers to Vienna, with a prophetic word “Your future is in Vienna”. Paul Sonntag, a former member of Father Bodewig’s association, came to Vienna in 1906 and zealously promoted the work of Father Bodewig’s vision by publishing his writings and new information about India. In 1909 he published the mission magazine “Light and Love” in view of promoting interest for the Indian mission. Dr. Theodor Innitzer, one of the Professors of the Vienna University supported Paul Sonntag’s undertaking. With his assistance, Paul Sonntag established the new missionary association under the title “Catholic Mission Work for India”. In 1923 Cardinal Friedrich Gustav Piffl approved the establishment of the new Congregation of the Missionary Sisters of the “Queen of the Apostles”. Theodor Innitzer was appointed as the first Superior General of the male branch. In 1925, for practical and administrative purpose, the male branch was separated from the female branch. On January 8, 1927, the first heralds of the young missionary Congregation embarked from Naples to India. They reached Bombay on January 24. Until 1949 the Congregation remained under the diocesan jurisdiction. On April 7, 1949, Pope Pius XII elevated this to the status of a Congregation of Pontifical right.

In 1928, the present motherhouse of the female branch was established in Vienna. During World War II, those in India did not have any contact with those in Europe. Hence in 1940, the 12 sisters who were then in India began to recruit new members from India. Since 1965, Indian sisters were active in Europe. On September 27, 2000, the first Indian sister, Sister M. Callista Panachickel was elected to the office of Superior General of the Congregation.

Beside Austria there are 106 convents in India, 4 in Germany and 1 in Italy. In 1983, they extended their mission work to the Philippines. Now there are five convents. Since 1992, they are also present in Eastern Europe, Slovakia. Today, there are 840 sisters working
in different parts of the world.

Overseas, the Congregation cares for the social welfare of the people through schools, adult literacy programs, hospital and health centers. In Europe, the sisters render their services to the sick. They also teach in kindergartens and function as pastoral assistants.

The Missionary Sisters of the Queen of the Apostles (SRA) are called to proclaim the compassionate love of God in the work of Renewed Evangelizaton. The congregation is present internationally in countries like Austria, Germany, Italy, Africa, Slovakia, India and the Philippines (Quezon City-Novitate Formaton House, Cebu City, Zamboanga City and Basilan).

Urged and inflamed by the compassion of Christ who said “I have compassion on the crowd because they are like sheep without a shepherd.” (Mathew 9:36), the congregation opts to go “where the need is great and to serve in love”. The spirit of availability and generosity make the congregation ready to go to any point of the world where a door is opened, to proclaim the Good News of God’s compassionate love, even to places where others dare not to go.

Like the experience of its founder, Father Antonius Maria Bodewig, German Jesuit, the co-founders Cardinal Innitzer, Cardinal of Vienna, Austria, and Father Paul Sonntag, SRA could be compared to the seed that fell to the ground, and out of the furrows of death it grew into a living tree that stands stretching out its branches on the fertle ground of the church.