Priests of the Sacred Heart 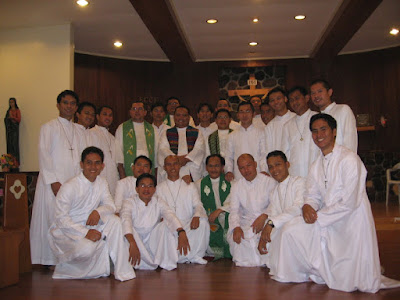 Venerable Father Leo John Dehon was born in LaChapelle, France on March 14, 1843. He studied law at the Sorbonne University in Paris. Although his family wanted him to practice law, he wanted to pursue a vocation to the priesthood, a call he had felt since his youth. He went to Rome to complete his studies in philosophy, theology, and church law, earning a doctorate in each of these fields. On December 19, 1868, he was ordained as a priest for the Diocese of Soissons. He founded the Congregation of the Priests of the Sacred Heart (SCJ) on June 28, 1878. He loved to work in the different ministries in the Church, promoting devotion to the Sacred Heart through love and reconciliation, offering assistance to local clergy, working in the mission, and social concerns. Father Dehon died in Brussels, Belgium on August 12, 1925. The Congregation grew throughout Europe, America, Africa, and Asia and is now working in 40 countries.

The SCJ presence in the Philippines began with the arrival of the first SCJ missionary group to serve the local Church in Mindanao on May 17, 1989 and later in Manila. They have one big parish in the Diocese of Pagadian, in which their Novitiate House is located. Another parish is located in the Prelature of Ipil, and a sub-parish in the Diocese of Cagayan de Oro in which a minor seminary is also located. The SCJ theological house located in the Diocese of Novaliches, Quezon City, involves its members in aiding chapels in the Divine Providence Parish in Payatas. At present, the District has 16 priests, 2 of them Filipino, 1 brother, 1 deacon, 24 scholastics, and 7 novices.
Posted by Team SBS at 10:28 PM