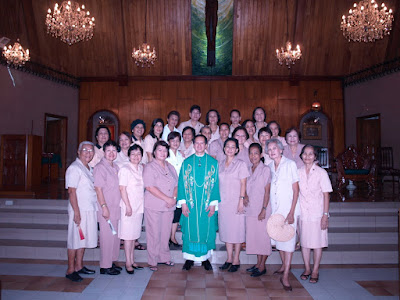 Mother Marie Joseph Butler, an Irish nun of the Religious of the Sacred Heart of Mary, encouraged the students of Marymouth College in USA to sew vestments and linen and to procure sacred vessels for distribution to the needy parishes. In the late 50’s, some Filipino women who were in contact with the said College began the apostolate of giving altar paraphernalia to poor parishes that marked the growth of Mother Butler Guild (MBG) in the Philippines. In 1961 and 1976, the Archdiocese of Manila and the Catholic Bishops’ Conference of the Philippines (CBCP) recognized the MBG as an organization of Catholic lay women who take care of the sacristy needs of the parish. It has then been a member of the Episcopal Commission on Lay Apostolate.

At San Lorenzo Ruiz Parish, the MBG was formed in 1988 with Luz H. Hizon as the first President until 1995. The Guild was entrusted with resource generation particularly on the construction of the parish church then. During the term of Nova Gallegos, the second President from 1996-2001, the Guild’s spiritual formation was highly emphasized. The MBG thrust was later expanded to socio-economic projects when Cecilia C. Jimenez became its third President in 2002-2003. As the fourth President in 2004-2005, Marietta C. Tiongson encouraged the members to focus in the sacristy work and altar preparation.
The MBG Spirituality

The MBG members are:

Servants of Jesus, our Servant-God.
They are called and chosen by the Lord to church service.

Housekeepers of the Lord.
They humbly, lovingly and joyfully keep in order the house of the Lord.

Presently, there are 49 active members, 8 honorary members, 4 candidates, and 15 inactive members. The organization is divided into 5 area groups which are headed by a leader and assistant leader. The MBG has been providing the vestments for all the parish and guest priests of SLRP. There are some occasions that it lends vestments to nearby congregations and parishes. For all celebrated masses, it provides clean altar linens based on liturgical colors and feasts. In addition, the MBG purchases the hosts, wines, candles, incense, and sacred vessels, and arranges flowers for the sanctuary. It has improved the offertory table, devised an organizer for the collection baskets, throne for the monstrance, and other enhancements in the celebration of the Holy Mass and sacraments. It makes sure that altar needs are in place before the mass, and properly kept after the mass. The Guild also supervises the identification of those who will offer during the mass, and collection during the offertory. Furthermore, it leads in the cleaning of the church and its periphery.

To cater to the needs of other parishioners, it spearheads livelihood seminars such as cooking, sewing, hotel & restaurant services, reflexology, and food preservation. For the members’ spiritual enrichment, it coordinates an annual close retreat, attends MBG Diocesan Recollection, MBG Vicariate Orientation, National MBG Anniversary Mass and Convention, SLRP’s daily masses, weekly holy hour, monthly dawn procession, novena masses, and the like. Consistently, it meets on the 3rd Sunday of the month with gospel reading, refection and sharing among the members. Most of the members likewise join the annual MBG summer outing.
MBG Officers (2009-11)