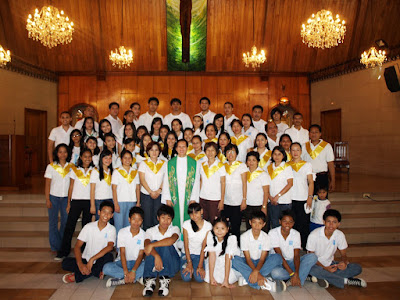 Choirs have played an integral part in all liturgical celebrations in San Lorenzo Ruiz Parish (SLRP) even before it was officially established. During the time of Father Thomas Nechikat, when SLRP was still a small chapel called “Church of the Resurrection,” there was already a youth choir pioneered by Ding Cariño. When Father Larry Toledo was appointed parish priest of SLRP in 1987, this choir adopted the name of SLRP Youth Choir under the leadership of Tess Yadao. The Apostleship of Prayer (AP) Choir was also formed and led by Ate Sylvia Tan.

With the appointment of Father Rolly Petronio as parish priest in 1993 and the growth of the SLRP community, Ate Sylvia became Head of the Parish Pastoral Council’s Worship Committee. The monthly Parish Renewal Experience (PREX) Seminars and prayer meetings inspired more young people to become active in serving the parish through music. The Praise Music Ministry was formed headed by Jun Salonga, Weng del Mundo, and Jean Cuadra. The SLRP Youth Choir then led by Dong Yadao was renamed Maharlika when it started to sing in a four-voice harmony (soprano, alto, tenor and bass).

During the time of Father Val de Vera as parish priest, the Couples for Christ Music Ministry headed by Kuya Ady Yazon, started to serve in the parish. Ate Sylvia formed the “Angels” comprising mostly of the Cuadra Children to sing “Reyna ng Langit” during the “Salubong” every Easter. The Praise Music Ministry was replaced by the “Dominic Boys” with Reden del Mundo, Nikki Español, Jun Salonga, Maynard Salonga, Robert Salonga, and Noli Trinidad as members.

In 2001 when Father Nelson Orqueta became parish priest, the first grand choir was convened during his installation. Father Nelson introduced a uniform song line-up for choirs. He provided all choirs a list of specific songs to sing for each Sunday of every month. He also started using music CDs as accompaniment during Mass on weekdays. The Daughters of Mary (DM) Sisters formed a children’s choir to sing in the 6:00am Mass every Sunday. Maharlika was renamed Gospel Choir with Rochelle Rufo as Coordinator.

Ate Sylvia was appointed Head of the Music Ministry when Father Pong del Rosario became parish priest. Upon her initiative, the Children’s Choir, originally composed of the “Angels” and the Cuadra Family, was assigned to Ate Tess Virata who became the choir’s instrumentalist. In 2004, upon the invitation of Father Pong to Brother Laya Victoria, the Couples for Christ Foundation for Family Life (CFC-FFL) commited their service to the parish by singing in the 6:30pm Mass every Saturday and the 6:00am Sunday Mass. The Enzo Choir was also formed with Pam del Mundo as Coordinator. Father Pong later established the SLRP Grand Choir to sing during special occasions, where he invited Danny Monte and Vera del Rosario to become its Music Directors. He also introduced the choir rotation to allow the parishioners to get to know the different choirs serving in the parish.