Aug 15 - Solemnity of the Assumption of the Blessed Virgin Mary 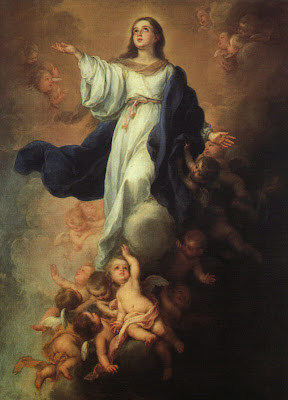 The Assumption of the Blessed Virgin Mary into Heaven at the end of her earthly life is a defined dogma of the Catholic Church. The Feast of the Assumption, celebrated every year on August 15, is a very old feast of the Church, celebrated universally by the sixth century. It commemorates the death of Mary and her bodily assumption into Heaven, before her body could begin to decay--a foretaste of our own bodily resurrection at the end of time. Because it signifies the Blessed Virgin's passing into eternal life, it is the most important of all Marian feasts and a holy day of obligation.
The feast was originally celebrated in the East, where it is known as the Feast of the Dormition, a word which means "the falling asleep." The earliest printed reference to the belief that Mary's body was assumed into Heaven dates from the fourth century, in a document entitled "The Falling Asleep of the Holy Mother of God." The document recounts, in the words of the Apostle John, to whom Christ on the Cross had entrusted the care of His mother, the death, laying in the tomb, and assumption of the Blessed Virgin. Tradition places Mary's death at Jerusalem or at Ephesus, where John was living.
On November 1, 1950, Pope Pius XII, exercising papal infallibility, declared in "Munificentissimus Deus" that it is a dogma of the Church "that the Immaculate Mother of God, the ever Virgin Mary, having completed the course of her earthly life, was assumed body and soul into heavenly glory." As a dogma, the Assumption is a required belief of all Catholics; anyone who publicly dissents from the dogma, Pope Pius declared, "has fallen away completely from the divine and Catholic Faith."
While the Eastern Orthodox believe in the Dormition, they object to the papal definition of the dogma, seeing it as unnecessary, since belief in Mary's bodily assumption, tradition holds, goes back to apostolic times.
Scott P. Richert
Catholicism Guide
Posted by Web Admin at 12:12 PM