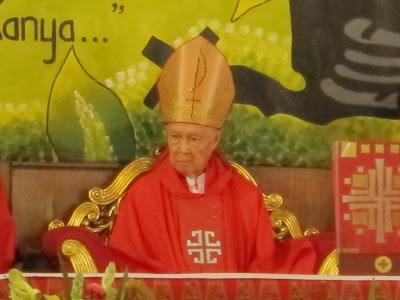 This year’s fiesta celebrations marked another milestone for the parish. Ever since the parish was formally consecrated by the late Jaime L. Cardinal Sin in 1987, this was the first time that another cardinal, His Eminence Jose T. Cardinal Sanchez, officiated Holy Mass, but more specifically the fiesta High Mass last September 25, 2011.
Extensive preparations were made to make the cardinal’s visit pleasant due to his advanced age. He was given a dignitary’s welcome, complete with the Knights of Columbus providing him with Honor Guards.
A short caracol procession by some of the parish youth ushered the entrance of the statue of San Lorenzo Ruiz borne on the shoulders of some KoC. This was followed by the mass.
In his homily, the good cardinal, who just recently retired as Prefect of the Clergy in Rome, espoused the virtues of brotherhood in the Lord when he said “If God is our Father, then we are all brothers and sisters...and we should take care of one another.”
After the mass, the cardinal was treated to some local cuisine from his native Bicol province. Fr. Luke and the PPC officers hosted the lunch.
Posted by Web Admin at 7:07 AM