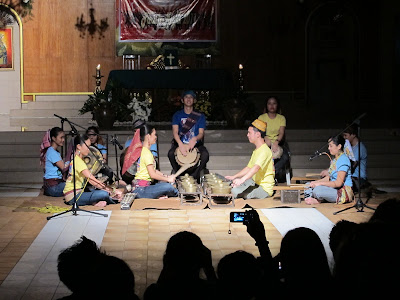 The Kontemporaryong Gamelan Pilipino or Kontra-GaPi, the resident ethnic music and dance ensemble of the College of Arts and Letters of the University of the Philippines in Diliman was a special guest at the SLRP’s Parish Night. Using ethnic instruments of drums, gongs and xylophones, they wowed the audience with music it rarely heard, music that someone said he associated with nature. Originally set to play two pieces of music, the band ended up playing four numbers to satisfy the audience’s request for more. Their last number delighted the audience even more when the female members danced to the beat of the instruments played by their fellow members.

The presence of the Kontra-GaPi during the Parish Night was made possible through Anjo Santiago, who is one of its members and who also happens to be the musical director of the SLRP Gospel Choir.